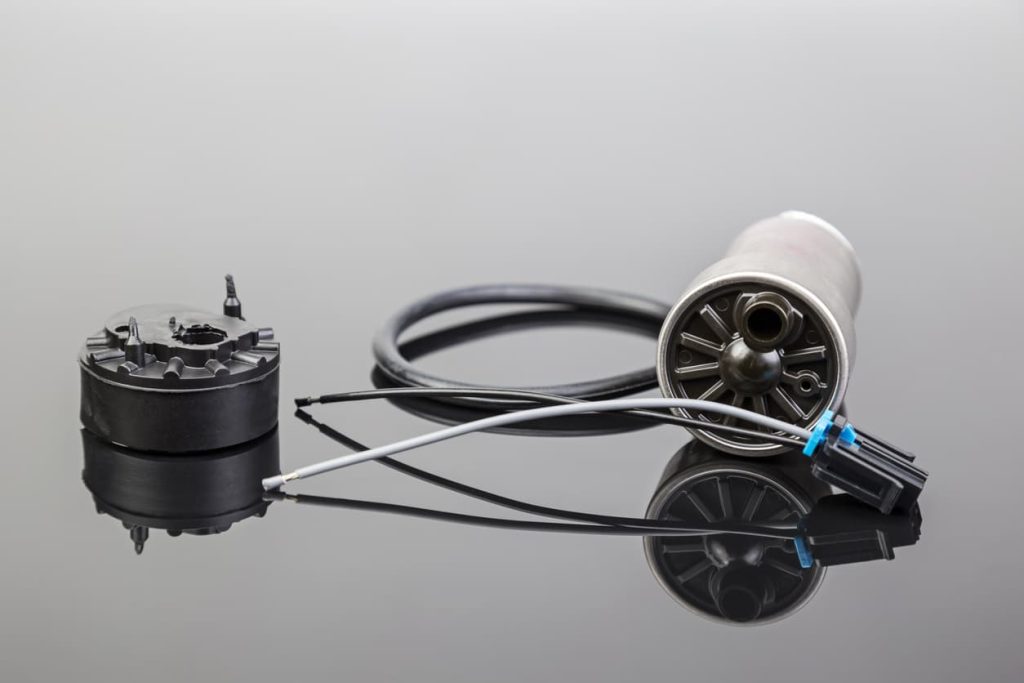 Your vehicle’s fuel pump is responsible for directing fuel from the gas tank to the engine. This part is either electrically or mechanically controlled, depending on the car’s make, model, and age. It’s a critical component in every gas-powered automobile.

A fuel pump typically lasts for about 100,000 miles, so it’s unlikely to become a problem unless you’ve had your vehicle for a long time or have purchased an older car. However, fuel contaminants and electrical faults can cause premature wear, so you’ll want to monitor this part for problems.

Fortunately, there are telltale signs your fuel pump is close to breaking down. Paying attention to these signals can lead you to a mechanic before fuel-pump failure leaves you waiting for a tow truck on the side of the road.

Here’s a look at seven of the most common fuel pump-failure symptoms that could occur in your vehicle.

Perhaps the clearest sign you have a fuel-pump issue is when your car won’t start or struggles to crank. Because the fuel pump is responsible for pushing fuel to the engine, an internal-combustion engine can’t start without a functional one.

As your fuel pump weakens, you might notice your vehicle failing to start on occasion or take multiple cranks to rev the engine. Don’t ignore these signs; it’s only a matter of time before your car won’t start or dies while you’re driving on the highway.

2) The fuel tank is whining

Before the car stops working entirely, you might notice other warning signs. One common symptom is a whining sound in the fuel tank. A functional fuel pump should make a low humming noise as it distributes fuel. A loud whining noise means the pump is trying to do its job but cannot move the fuel.

The sound will be loud enough to hear when standing outside the vehicle and usually means a fuel-pump problem. Remember that cars can produce a similar noise when out of fuel, so check your gauge before heading to a mechanic.

Because a failing fuel pump struggles to push fuel through the system, a sputtering engine is another sign you have an issue. This problem typically occurs at high speeds because the fuel pump cannot keep up with the amount of fuel consumed when driving fast.

The sputter will start slowly, with a slight hesitation, before returning to normal. The problem will worsen over time. A functional fuel pump provides a constant stream of fuel at the ideal pressure, but one that is aging or breaking down can’t.

With today’s fuel prices, you don’t want to increase visits to gas stations, but that could happen when your fuel pump fails.

Reduced fuel efficiency occurs when a valve fails to open within your fuel pump. The result is more gas than needed entering your fuel system, increasing fuel usage.

Filling the gas tank is incredibly expensive. Watch your fuel consumption and replace your fuel pump early if your mechanic determines it’s the culprit.

You could experience a loss of power when your fuel pump is dying, especially when putting the vehicle under stress. For instance, your engine could shut down when driving up a large hill or towing a heavy load when your fuel pump starts to break down.

Like the engine sputtering on the highway, this problem occurs because the pump can’t keep up with fuel needs. Power loss can be dangerous; visit a mechanic immediately if you experience this problem.

A surging engine makes it feel like you’re pressing the gas pedal when you aren’t. It usually occurs randomly and can happen when you’re idling or accelerating.

Car surges mean the fuel pump can no longer consistently provide your car’s engine with the right amount of fuel because it’s beginning to wear down.

Your engine won’t stall until your fuel pump problem is critical because even an old fuel pump will send some fuel to the engine. Once the pump is nearly shot, though, your engine could stall while you’re driving.

A stall usually occurs because the fuel pump is causing the engine to overheat. In this scenario, the engine isn’t receiving enough fuel, so it must work harder to keep the vehicle running. Eventually, this additional strain on the motor causes it to overheat and shut down.

You might notice your engine running hot as your fuel pump reaches the end of its life cycle, so keep an eye on that problem, too.

Limiting the wear on your car’s components

These fuel-pump failure symptoms are worth watching as you drive your vehicle, but you can keep this component in better shape by driving less. For instance, shipping your car when traveling long distances reduces the wear on your fuel pump and other parts, saving you money on maintenance and future repairs.

How to Buy a Car on eBay Without Getting Scammed (+ Tips)

How Many Cars Fit in a Shipping Container: Costs & Dimensions

How Much Does Enclosed Auto Transport Cost? + Pros and Cons

Best States to Buy a Car: How to Save Thousands (+ tips)

How to Inspect a Car Before Buying It (Complete Guide)

What is Open Auto Transport? (The Cheapest Car Shipping Option)

Auto Transport Scams (How to Avoid Them)

What Our Customrs Are Saying

How is My Quote Determined?

We feel it’s important for you to know how we determined your quote. Quotes are based on what the market demands for cars to be moved at a given time. Each quote is compared with the current rates on the National Load Board before being sent to our customers and will be reviewed periodically through the process.

Other companies might offer you a lower price to obtain your business. This method is ineffective because if the car does not pay the correct amount of money, it will run the probability of not getting loaded or transported on time. You will not get this information from our competitors. Truck drivers always take the loads that pay the most first, leaving the loads that are mispriced to be moved last or not at all. We try very hard to avoid this with our customers by quoting a fair but realistic quote up front. Visit our How we determine your quote page for more information.

How is my vehicle covered by Insurance?

Understanding auto transport insurance is important and we think it’s valuable to explain how it works. As part of providing a great car transport service, it is our job to guarantee that the carrier we assign to pickup your vehicle is licensed and insured. Click here to check out our license.

When you go with Mercury to ship your vehicle, you can rest assured that the carrier assigned to move your car is fully insured and licensed with the FMCSA (Federal Motor Carrier and Saftey Administration).

Your vehicle is covered by the carrier’s insurance policy that is doing the shipping. Depending on the type and size of the truck/trailer that is shipping your car, the insurance policy can cover from $100,000 to $1,000,000 of damage.

We have also provided a checklist to explain what you need to do at both pickup and delivery in case there are any issues so, you can file a claim and know that everything will be taken care of.

It is rare but, time-to-time there may be accidental damage while in transit and it is good to know that your carrier’s insurance will protect your auto shipment in that event.

To view a sample BOL (Bill of Lading) and learn what to do in case of accidental damage, please check out our Condition Report and Procedure checklist.

How Much Will it Cost?

When comparing auto transport companies, keep in mind that low-priced quotes often result in delays in getting your vehicle loaded. Choosing the right broker is vital to getting a reputable carrier for the lowest price possible.

We feel it’s important for you to know how we determine your quote.

When you’re looking for a car shipping rate, you want to understand how auto transport works. Prices are based on seasonal market demands for cars to be moved at any given time. Each quote is prepared based on the season and the current national rates.

When comparing auto transport companies, keep in mind that low-priced quotes often result in delays in getting your vehicle loaded. Choosing the right broker is vital to getting a reputable carrier for the lowest price possible. Not all brokers are created equal in this talent.

You can have peace of mind knowing that the carrier shipping your vehicle is the very best and that there are no surprises guaranteed.

While we do our best match your auto shipping needs with the most responsible carriers with the best track records, from time-to-time there may be accidental damage while in transit, it is good to know that the insurance of the carrier we locate for you will protect your auto shipment in that event.

What Should I Do to Prepare?

Shipping a vehicle can be stressful if you don’t know what to do.  This is why we believe it is paramount to have our highly trained agents be your main point of contact from start to finish.

They will go over everything you need to know so you can relax.  In the meanwhile, we prepared this checklist.  This includes everything from pickup to delivery and how to make sure your car is ready for pickup.

When it comes to car moving, we want you to be ahead of the game!  For any questions and further assistance our agents are standing by, (800) 553-1828.  Please read our checklist to prepare your vehicle to learn more.

What Are My Auto Shipping Service Options?

There are several ways you can ship a car.  The options include enclosed trailer, open carrier transport, flatbed truck, door-to-door shipping services, and to or from a terminal as well.  The most popular of the options is a 7 to 10 car open carrier.  These large trucks can accommodate almost any size vehicle including cars, SUVs, trucks, jeeps, and vans.

Open car transport, door to door is also the best way to get the cheapest auto transport rate possible.  To learn more and see what transport method is best for you, please fill out our free quote form and one of our representatives will respond to you within minutes.  You can also call us at (800) 553-1828.

You have already reported this .
Clear Clear All